When I was in NZ my idea was to be there until December/January, however the second lockdown changed everything and finally, we decided to go back to our countries. But, I didn’t know that before it happened (I’m not a magus), so I bought a Nintendo Switch Lite to spend some hours of free time.

My idea was to buy a second hand yellow model for about $270 (150€), but I couldn’t do that because with the second lockdown all video game console increased of price to $350. After it finished, I found an advertisement on Facebook from someone who was trying to sell one with the left joystick broken. It was $150 (85€), so after contacting with her owner to ask about it and its possible problems, I decided to buy it.

This was the Ad:

Turquoise switch lite. Purchased from Mighty ape. Selling cheaply as one of the joysticks broke off. Console still works perfectly. Will send the clear protector, charger and the case that’s the console been kept in. Console can be fixed at EB games for around $158 or you can purchase a repair kit on Trademe. Serious offers only please.

It fell between the bed and the wall and when I pulled it up it came off. I’ve played it with Harry Potter Lego and Pokémon and it works fine.

I decided to take the risk, and it finished with a good result because the video game console is perfect. The reparation was easy, but I’m going to speak about that in the next article, here I want to write about this video game console.

My first impression was that it was so light, I thought it would be heavy but no, it wasn’t. After testing everything and install a lot of demos from the Nintendo shop. I was disappointed about the main graphic interface where the game icons are, you can not change the size of the icons to put less or more on the screen, after you have too many the rest move to the “box” where you need to go inside and find the game you want to play. Nintendo 3DS allows to have a lot of games and change the size of the icons, you can have a hundred if you put them small (maybe).

The portable video game console has also other functionalities that Nintendo Switch doesn’t have, I don’t know why in this generation they haven’t care enough their device with more software and functionalities, and games. 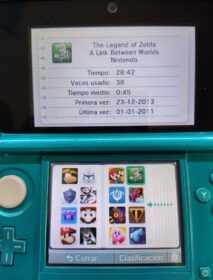 I had never had a video game console for TV until now, but they removed the HDMI connector so isn’t for TV now, because I always preferred to play on portable video game console. I don’t know, I just decided to try because I wanna play 2 or 3 games, maybe some more.

If the time I dedicate to the blog providing information is useful to you, you can help me with a donation to keep the server, thanks!